_ The year is 2120. Humanity has survived an alien invasion that killed nearly half the Earth's population and left once beautiful cities in ruin. But mankind has risen from the ashes, and thanks to captured alien technology humanity has made great strides in rebuilding its civilization. Earth is no longer our only home. Colonies have been built on the Moon, Mars, and in orbit around Venus. But the greatest achievement of all is the discovery of time travel!

But like many great discoveries time travel has fallen into the wrong hands. Rogue nations and organizations of "time terrorists" seek to alter the flow of time in their favor. The only thing stopping them from causing irreparable damage to the Earth's history are teams of brave agents from the TimeSPAN Agency.

TimeSPAN is a science fiction time travel game using the d20 and d6 for its game mechanics and a class-based character generation system. The setting forces players to think about the potential consequences of their actions, for a single mistake at a critical moment might erase a character's existence entirely. TimeSPAN also includes guideline for using the setting with other role playing games, tips on how to use TimeSPAN's system for a generic science fiction campaign, and rule for using it with the MADS role playing game. 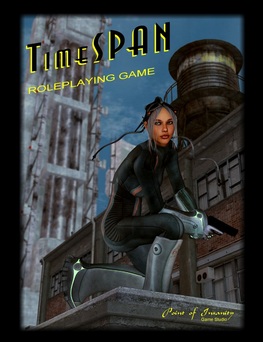